Why Should We Pursue Greatness? 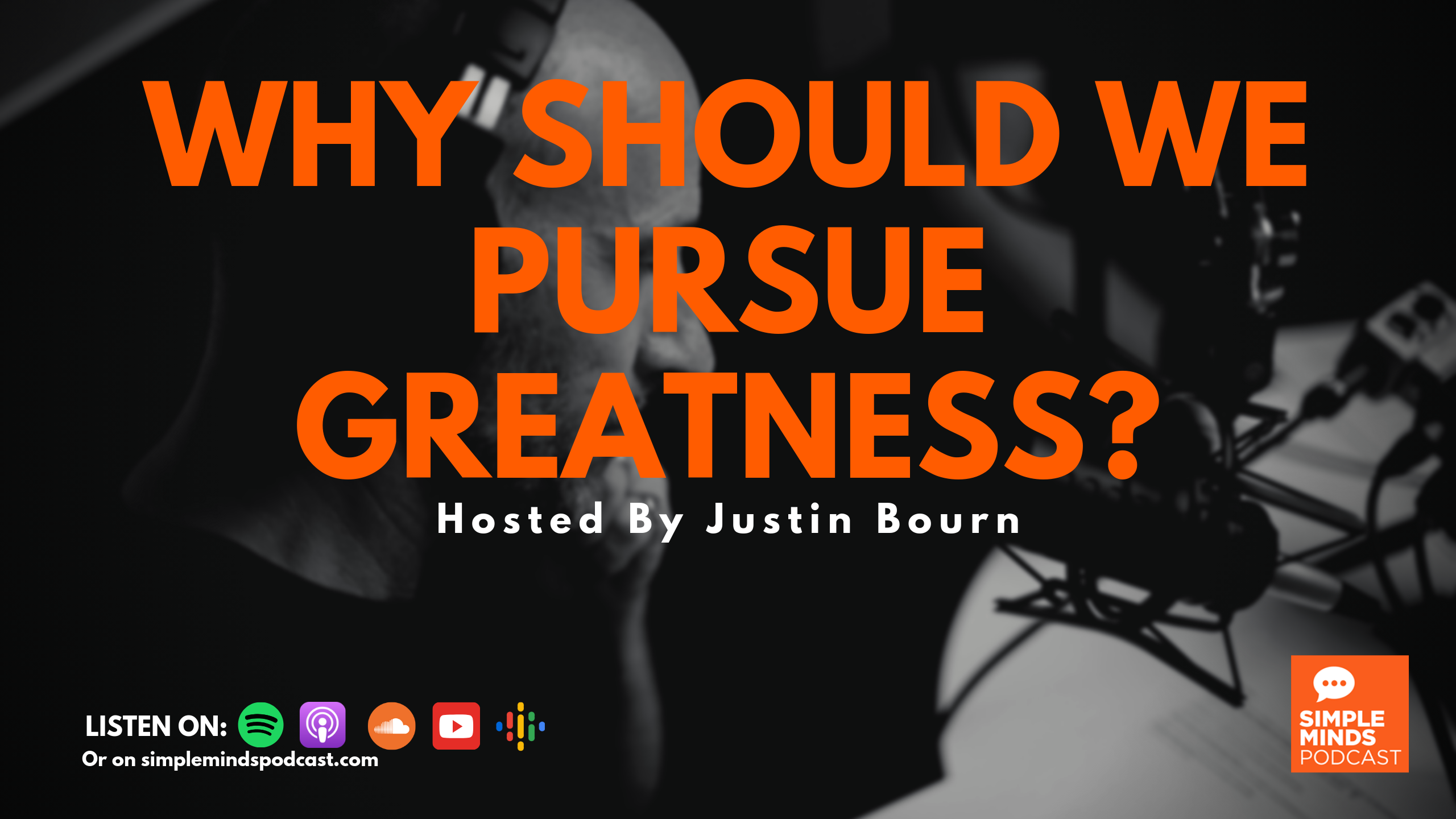 This week, Justin brings the guys a juicy topic on the subject of GREATNESS.

Along with him, Justin has also brought a delightful bottle of Japanese Whisky* to compliment the tone of the conversation and also keep in the theme of the guys bringing whiskey to everything.

We all are Justin. We all are.

The inevitable starting point for this is, of course, figuring out just what “greatness” actually is in the first place.

The problem here is that, well, the term “great” and “greatness” has a variety of meanings.

For example, there’s a massive difference between saying that a sandwich you ate was “great” and then describing the achievements of an individual as “great”. (Though we do have to say, there is nothing on this earth better than a good sandwich.)

Usually, we have historically reserved the term “great” for some pretty big people:

Ok, so all of those examples were for people who lived hundreds of years ago. Sure. But the principle here is the same - you have to do some pretty big things in your life to be considered a truly “great” person.

In a similar fashion to last week's blog on Nietzsche's theories on Ubermensch and The Last Men, there are several theories on the idea of greatness and “great men” in particular.

In essence, the theory posits that most of human history and it’s various advancements can ultimately be attributed to the emergence of “great men” at the time.

Thomas Carlyle, who is chiefly credited with the ideation of the Great Man Theory wrote:

Universal History, the history of what man has accomplished in this world, is at bottom the History of the Great Men who have worked here. They were the leaders of men, these great ones; the modellers, patterns, and in a wide sense creators, of whatsoever the general mass of men contrived to do or to attain; all things that we see standing accomplished in the world are properly the outer material result, the practical realization and embodiment, of Thoughts that dwelt in the Great Men sent into the world: the soul of the whole world's history, it may justly be considered, were the history of these.

This, however, was a widely criticized theory, with Herbert Spencer, in particular, rebutting that before a “great man” can “remake his society, society must make him.”

Are We Meant To Be Great?

So with all of this talk of being great and having great men in our society, the question of greatness inevitably comes down to the idea of whether all of us, as people, are capable of achieving greatness? Or is greatness a trait only shared by a rare few?

It’s a tricky question, though the argument can be made that “greatness” is not so much a trait to be gained or inherited, but a perception by others of the person in question.

Working off that, it can be assumed that everyone has the capacity to be “great” and that ultimately it’s a combination of inclination, trait accumulation and luck that “great” people and their achievements begin to manifest.

According to Bill Dorris’s book, The Arrival of The Fittest: How The Great Become Great (2009), the core reasons for the emergence of “great” individuals is a combination of an initial, genetic, potential coupled with an accumulation of traits over decades that fit the “problems” the individual finds themselves tasked with overcoming. This eventually develops into “key characteristics” that become critical to the solving of key generation issues that then go on to define the individual who, having been central to solving this problem, become recognized as “great”.

In this, Dorris further argues that “great” individuals can be anyone, so long as they go through a period of “exponential rise” in trait accumulation and development of the previously mentioned “key characteristics”.

This “exponential rise” is achieved as the person becomes, sometimes by chance, the focal point of a largely self-reinforcing system that grows in resources and expertise with the continued development and, more importantly, increased visibility of the person it swirls around.

A good example would be the previously mentioned Alexander The Great, whose knowledge of history, military tactics and governance would not have been possible had his father not been King Phillip II of Macedon.

In  addition to providing the right genetic potential and societal position,  Phillip also inadvertently created a system of development and knowledge for Alexander who, along with an incredibly large host of advisors and mentors (including Aristotle), took great pains to avoid the mistakes that Phillip had made in his conquest of Greece some thirty years earlier.

When Alexander eventually inherited the throne from his father, he was perfectly placed and developed enough to take the reigns of a kingdom whose economic and military power was already considerable, with plans already made by Phillips before his death to invade the lands Alexander would go on to conquer.

Of course, we can’t all be the son of a fabled conqueror and king before going on to establish one of the greatest empires of the classical era. But we can use this knowledge to place ourselves in the right positions and achieve the right mindset to become “great”.

By the sounds of it, achieving “greatness” seems to be really similar to real estate where the old cliche reigns supreme:

That’s it for this week in the Simple Minds Blog!