Stoicism and a Chat with an Australian Bobsledder (with Champagne)

Stoicism and a Chat with an Australian Bobsledder (with Champagne) 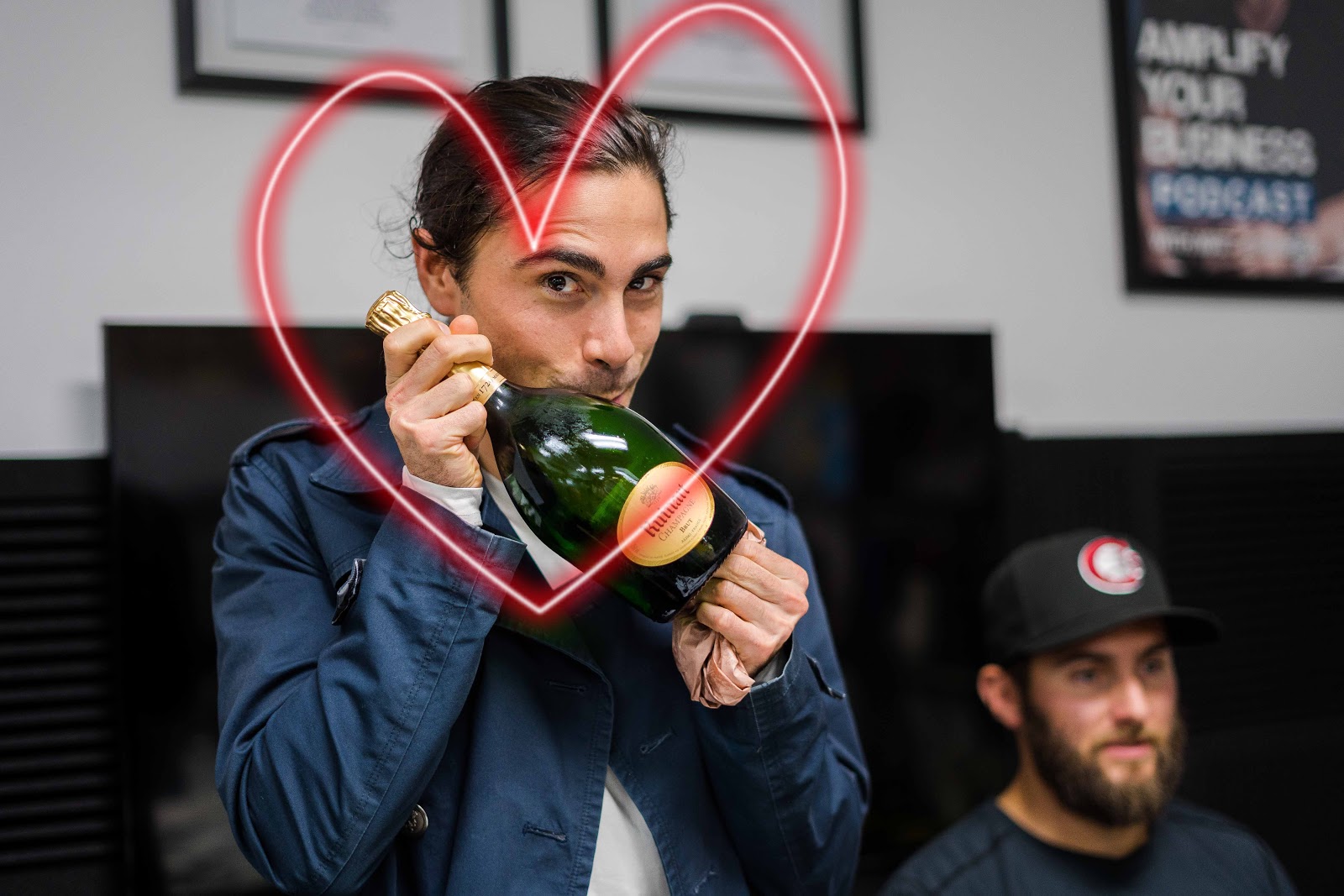 In this week's episode, we explore Stoicism and how to draw perspective from it. Later in the episode, we chat with Aussie Olympic Bobsledder Lucas Mata and learn what he got out of his training.

This round is on Marco Noe with the support of Matt Hanham, Michael Duncan, Jacob Moffitt, and Conrad “Swaggy C” Francis. The Simple Minds Podcast unravels topics such as personal development, philosophy, life and business - one drink at a time. 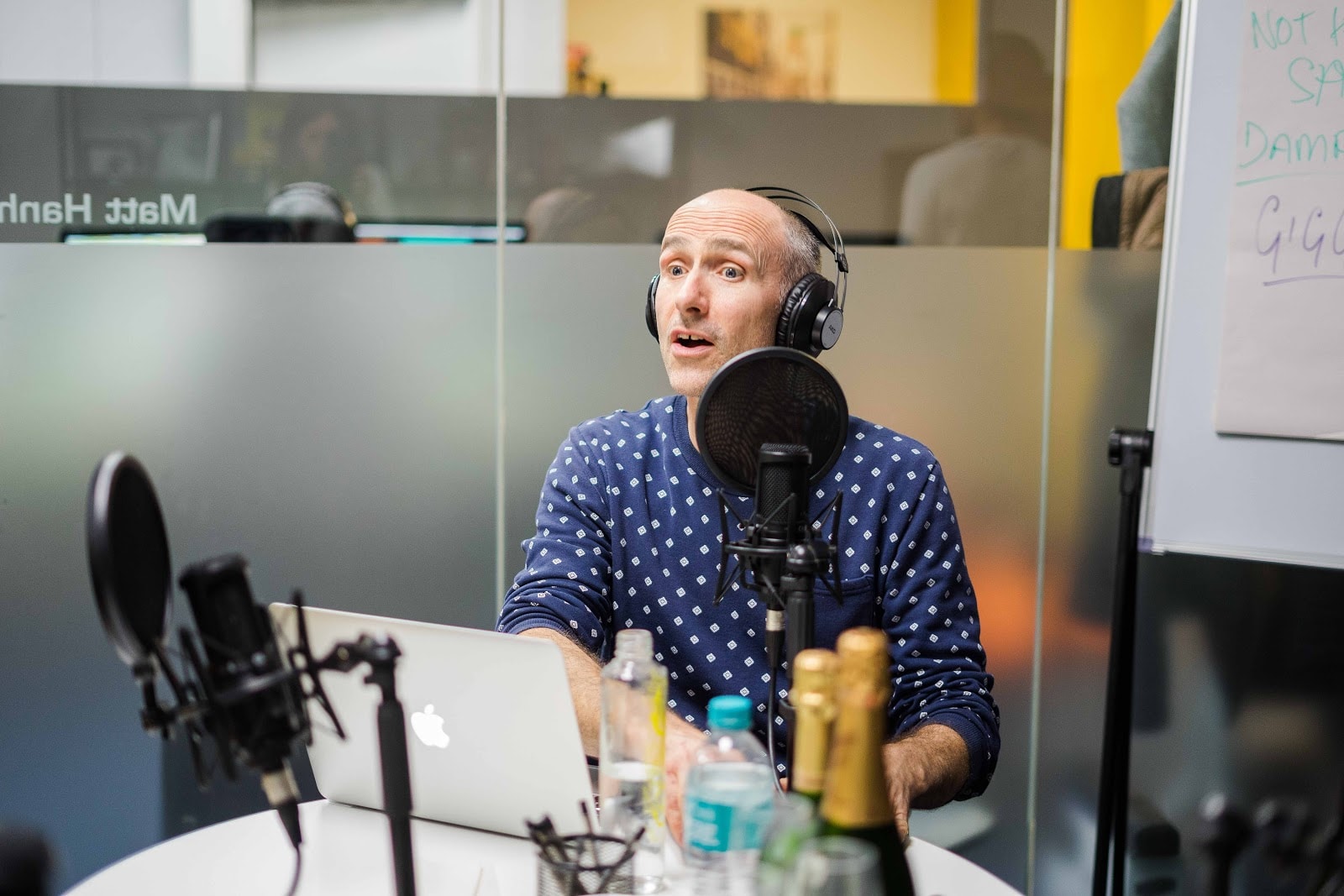 Resident power thinker and in-house philosopher at the Simple Minds Podcast, Michael Duncan is tickling our stoic muscles this week.

For those unaware with the concept, Stoicism is how you respond to a situation out of your control. We all make choices in our lives, some good and some bad.

“The car is a perfect example. Being in a car, using a stoicism on a practical day to day level. When you’re in a car and someone comes up your bum...that sounded really bad” - Michael [9:10]

Ok. Restarting. What Michael was trying to say was that you have a choice when you react to the situation.

Stoicism as a practice is only recently coming into culture again. Commonly discussed on the likes on the Tim Ferriss Show. However, originally readings on stoicism have come from Letters from a Stoic by philosopher Senecas and Meditations by philosopher Marcus Aurelius.

Every few months, Michael likes to read this passage from Meditations to get some perspective, if he’s having a particularly rough time.

“At dawn when you have trouble getting out of bed, tell yourself I have to go to work as a human being. What do I have to complain of? if I’m going to do what I was born for, the thing I was brought into this world to do. Or was this what I was created for? To huddle underneath the blankets and stay warm. But it’s nice in here. We were born to feel nice. Instead of doing things, and experiencing them. Don’t you see the plants, the birds, the ants, the spiders and bees going about their individual tasks putting the world in order as best as they can? But you’re not willing to do your job as a human being? Why aren’t you running to do what your nature demands? But we have to sleep sometimes, agreed but nature has set a limit on that, as it did eating and drinking, and you’re over the limit. You’ve had more than enough of that. But not of working. There, you’re still below your quota.” - [14:00]

With all the noise in the world, it’s easy to settle into your excuses. If others are doing it, then I guess it’s okay if you huddle underneath the blankets all day too? But that’s your choice. No one else. You weren’t forced.

How can we unravel this mindset though? How do we act with more of a stoic mindset and get the work done?

30 hours prior to the podcast recording, Michael challenged the gang to practice misfortune.

Now, some people choose to be more lax with the challenge. No naming names. Except I am.

Michael rose to the challenge he set, and fasted for 30 hours, put away his phone and slept on the cold floor all night.

Matt’s chose to sleep in a swag overnight. Like a trooper, he braved the cold winter stormy night. We’ll let him have this one, despite cheating and finding a nice dry bit of porch to rough it on.

Jacob struggled with self-discipline. At the end of the day, this was an exercise. He’s fortunate enough to be surrounded by the luxury of food, water, shelter and warmth. There is a real difference between restricting yourself and people who are actually homeless. The experience reminded him of his time in the army reserve where he’d sleep on rocky grounds and wear the same pair of clothes for 2 weeks. When everything is out of your control, you learn to just do what you have to do. But he was aware that the artificial training was nothing compared to the guys on the front line in the middle east. Perspective is important. You need to know what you’re fortunate to have, and not disrespect it.

Listening to the topic, it reminded Lucus of his time training for the Winter Olympics. He went overseas and slept on the floor in a basement, only to get up the next morning and train. But it’s what you had to do. It’s not ideal when you’re training to be an elite athlete, but you get used to it. Humans are incredibly adaptable. When you have a goal in mind, you can withstand anything.

Conrad being the god that he is, fell into stoicism. It found him. But when he did become aware of the concept, he then reapplied the lessons backwards. Conrad reflected on Lucas's experience. He thinks if Lucas were to look into stoicism he’d realise what he’s already picked up and he’ll feel more confident with his choices moving forward.

Conrad asks the group whether or not anyone learnt anything during the challenge that they didn’t already know about themselves.

The consensus amongst the group was no one really learnt anything they didn’t know already themselves. We tend to know what we could be capable of, and what we can withstand.

Marco says that it brought to the surface that he needs to exercise his self-discipline muscle more. The more you stretch it, the more you’ll benefit from it. You’ll make decisions quicker, and you’ll stop giving into your ego to satisfy excuses and laziness.

However, what really came from the experience was the realisation that we all have different opinions based on our own experiences in our life. But when you take the time to listen to someone, understand their background, it can grow a bond like no other.

Okay, that’s enough with the sappiness. We need to ask a more important question:  Who the fuck decides to wake up one day and become an Australian bobsledder? 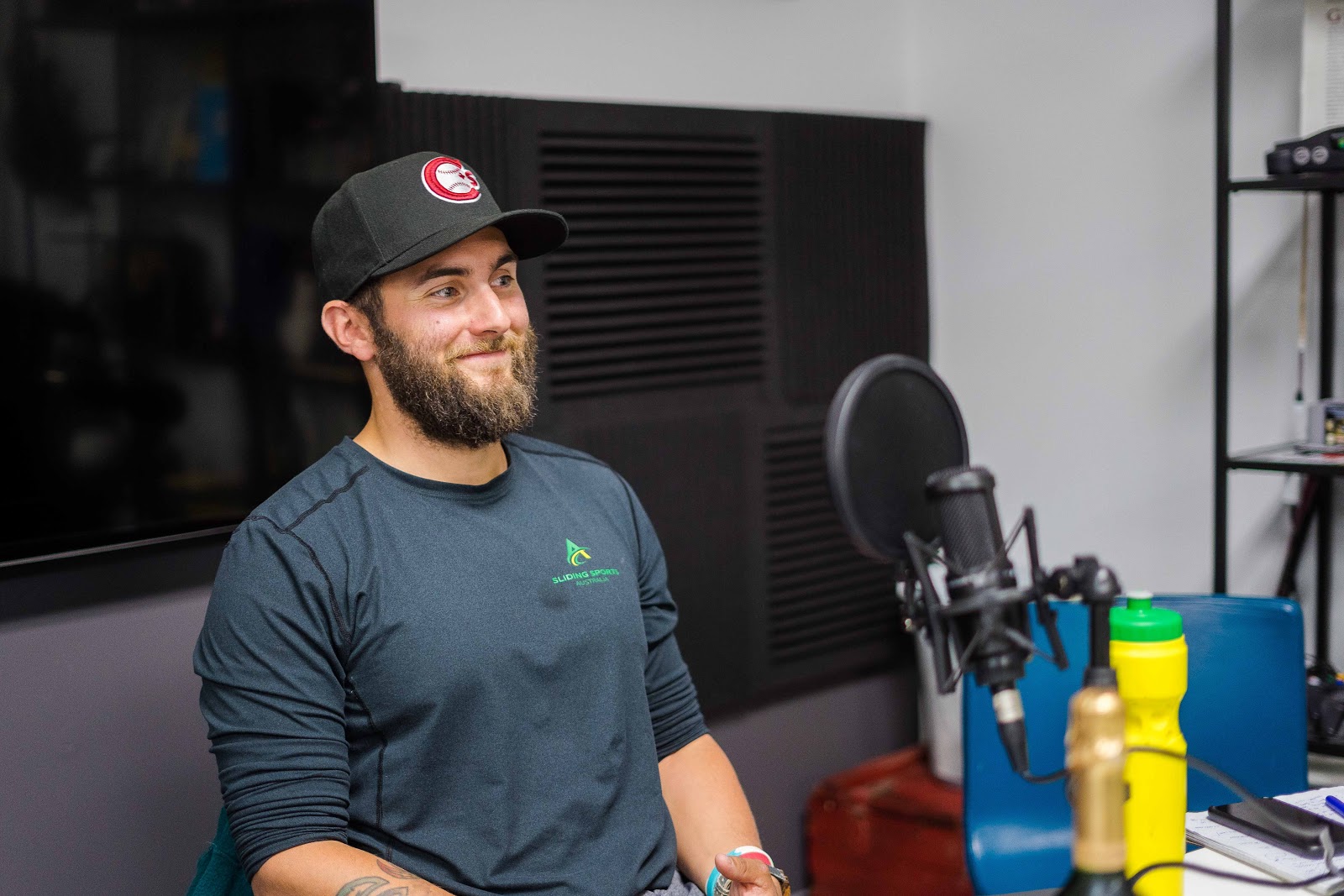 It only feels right to intro this topic with this cracker quote from Matt.

“When does someone's life goal become flying down a hill? Did you watch Cool Runnings? When did you throw your entire life to: I’m going to throw myself down that fucking hill as fast as I can?” - Matt [49:00]

That’s one way to put it.

Or as Lucas puts it “it’s where sprinters go to die”.

Who is Lucas Mata? You may have already guessed that Lucas in an Olympic Australian Bobsledder.

Prior to becoming a bobsledder, the dream was to become an Olympic sprinter. He was well on his way until a few injuries put him on the sidelines before championships. Unfortunately, it put him away from a door that could have opened.

But opportunity can be funny. It can appear out of nowhere and change your life forever.

Lucas received a Facebook message one day asking whether or not he’d be interested in competing in the 2014 Winter Olympics. He was asked to fly over to a testing camp. So the flight was booked that night and the next day he flew out. When he arrived at the camp, he was told to rest up because he’d be competing the next day.

Lucas had never seen a bobsled in real life, until the day he was supposed to compete in one. Seven years later, he’s still doing the sport.

Marco is in the midst of defining his own life mission and vision for himself and the work he hopes to achieve. The reason why he brought Lucas on the podcast was to share his journey in saying “I want to go to the Olympics” and then being open enough to allow any path to get him there, not in the way you originally anticipated. This is something Marco wants to learn and understand the mindset required to get there.

What Marco has learnt over the last few years is that proximity is power, and when you surround yourself with great people, doors will be flinging open.

Whether it’s in bobsledding or flying over to London to pursue a videography opportunity. You never know where a path will take you, until you walk it.

Our challenge to you all this week is to take up an opportunity that you’re doubting. If you’re doubting it, question why you are. Unpack it, and make a damn decision.

That’s it from us, and this is a goodbye from our own Marco.

We’re sad to see you go, but we know his journey is about to start. We love you buddy, keep fighting for what you love to do. 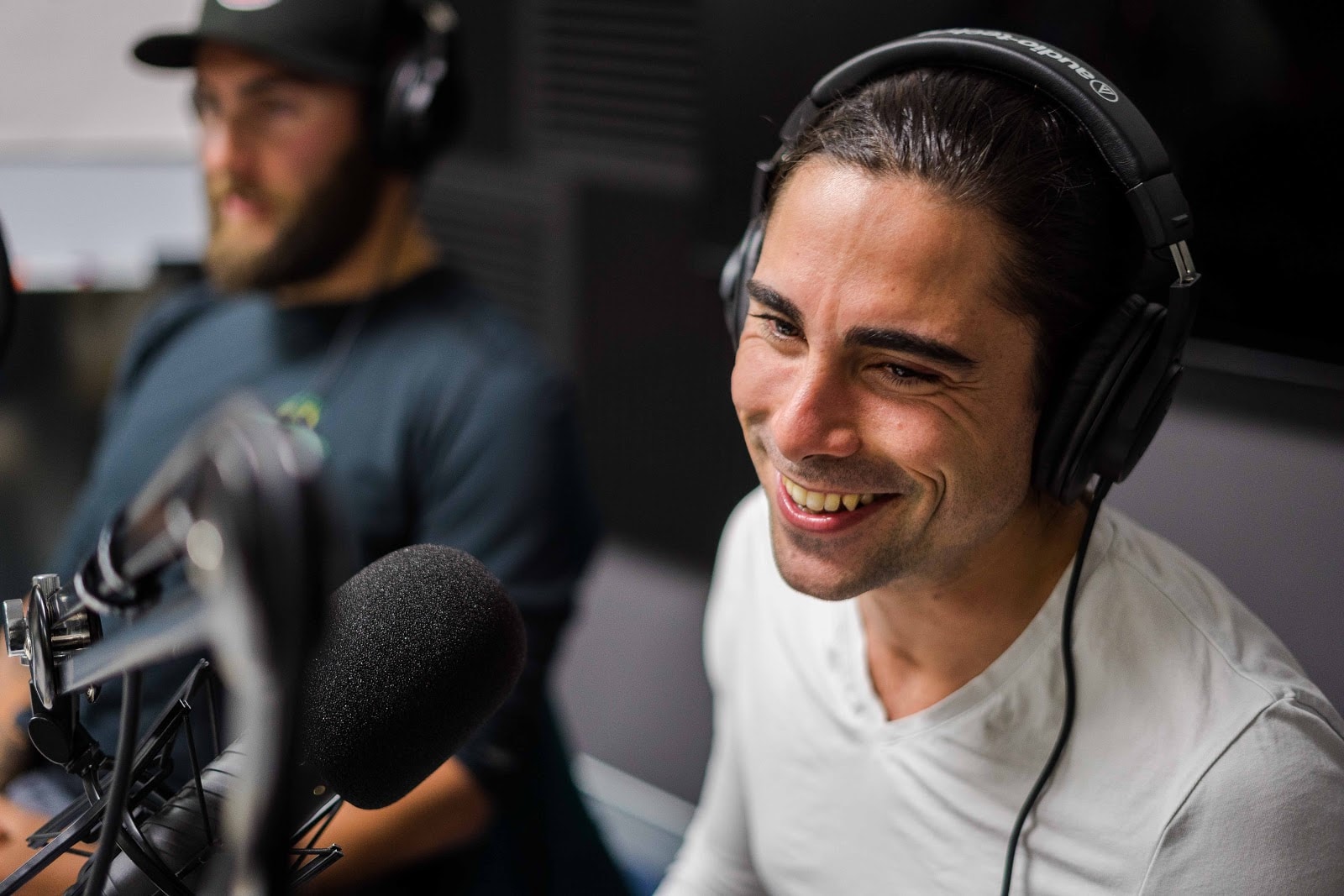 Subscribe to the Simple Minds podcast to keep stretching them stoic muscles.

What have you done that is stoic lately?