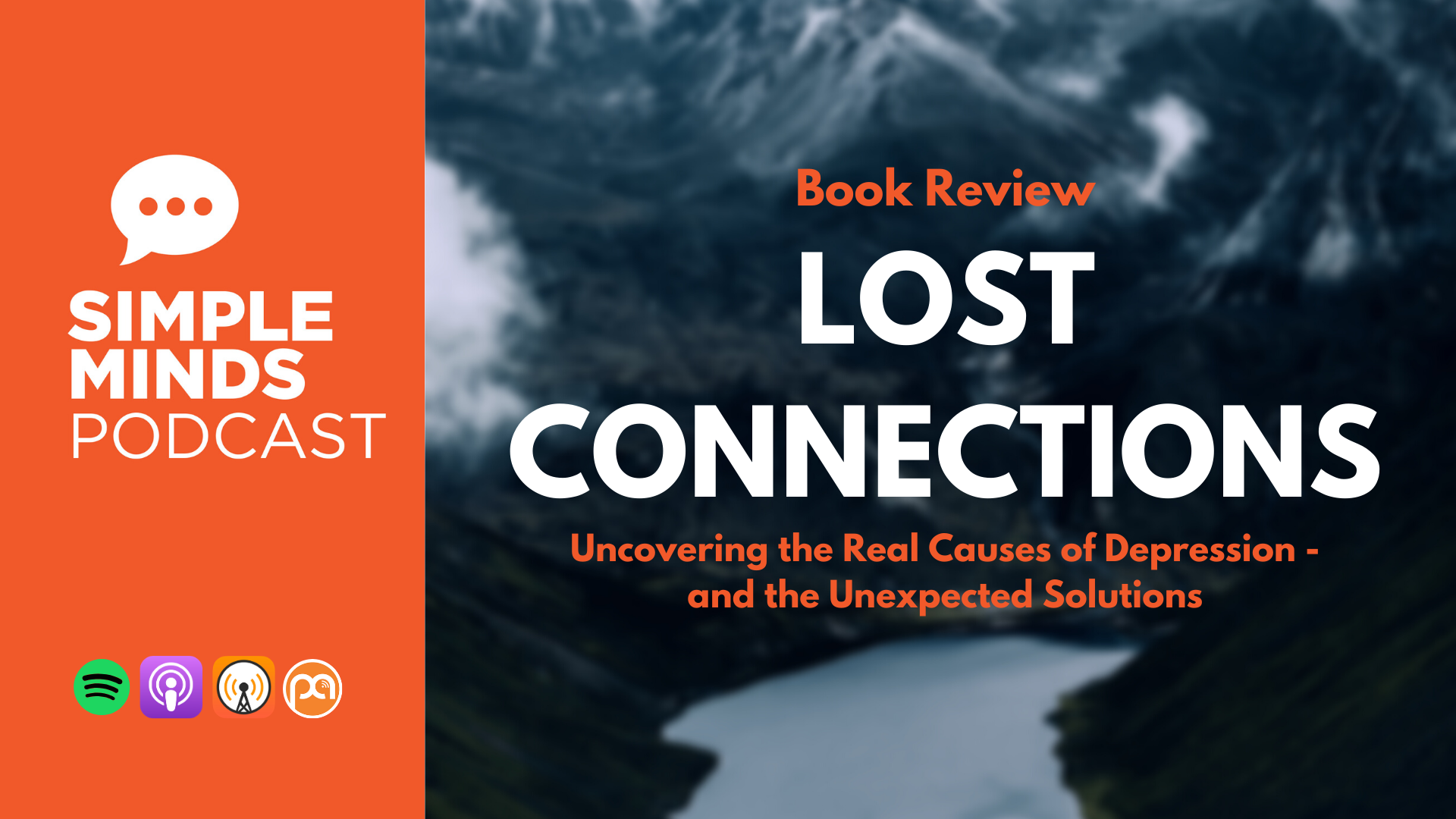 The lads have returned for another episode of the Simple Minds Podcast.

Conrad is the host this week and he’s brought with him a book. A REAL book too and not a colouring book as usual!

He’s also decided to keep things pretty light this episode, the book in question is Lost Connections: Uncovering the Real Causes of Depression and the Unexpected Solutions. Yeah. Strap yourself in, things are about to get DEEP.

Conrad’s also broken from tradition by not bringing wine, as usual, but instead a beer - 4 Pines Brewing IPA !

“I usually take a wine from the office for the show but I forgot this time and so had to actually go and buy some beer from the bottleshop.” - Conye, clearly irritated he had to spend money on booze for the show.

Conrad came in the other day brandishing a particularly interesting book called Lost Connections: Uncovering the Real Causes of Depression - and the Unexpected Solutions. Written by Johann Hari, the book covers what is referred to as an “epidemic” of cases of depression in the current era.

There are multiple causes for depression as explained by Hari, though we’ll summarise a few of the major ones.

The primary cause for depression, according to Hari, has been the epidemic of disconnect from what some may view as ‘meaningful work’. This can be harmful to the point that only through employee empowerment and meaningful support and responsibility can the damage be alleviated.

As a specific example, in the 1970s Michael Marmont was tasked with discovering the effects work had on the mental states of both employees and their bosses. Over the course of the extremely thorough psychiatric study, Marmont eventually figured out that the relationship between bosses and their employees was pretty much the exact opposite of what everyone previously believed, with bosses experiencing a much lower risk towards bouts of depression and anxiety, and their employees actually being at far greater risk conversely.

This can be exemplified in the story of when Michael Marmont was asked to investigate the high suicide rates amongst workers in the British Tax Office. The discovery in that situation corroborated Marmont’s previous discovery, with the culture of the British Tax Office being principally defined by a complete lack of meaning and control being felt by employees.

Just a Dash of Loneliness

A second cause can be an acute sense of loneliness or a disconnect from relationships.

Culturally speaking, western societies such as the US, the UK and Australia have a strong emphasis on the concept of individuality and the power of the individual. While, in many cases, this mindset certainly has its benefits compared to more collectivist societies, the downside to this mode of thinking can come in the form of extreme loneliness.

The individualist mindset creates blind spots in our perception of outside influences and how they affect our mental health, with the major resulting symptom being a feeling of loneliness.

In the 1990s, neuroscientist John Cacioppo discovered that acute loneliness can be a major contributor to higher levels of stress and anxiety which, in turn, result in a greater risk of depression.

These feelings of anxiety and stress, in some cases, can be equivalent to the feeling of stress that you’d feel if you were randomly punched by a stranger.

“I’ve experienced both!” - Conrad, again demonstrating that he has weirder weekends than you.

Unsurprisingly, the giant dystopic nightmare of consumerism that we like to call our society and economy is also a major contributor to rising rates of depression and suicide.

As explained by Johann Hari, the nature of mass consumerism is its ability to efficiently erode what Hari views as traditional or intrinsic values.

What seems to be near-universally agreed is that there are two different sets of values that we experience: intrinsic and extrinsic.

Intrinsic value comes from the pure or true enjoyment of an action or item that is fulfilling for you. Playing the piano for the simple joy it brings when playing can be viewed as a key example of what intrinsic value is.

Conversely, if you’re playing the piano for the sole reason of trying to make money from your performance, then the value you gain from that would be classified as extrinsic.

Modern marketing of products for us to buy at a mass scale has been proven in multiple studies to push us towards searching for extrinsic values first. The problem here is that extrinsic values, by nature, have a far lower sense of reward than intrinsic values. This means the more people are pushed towards buying things like clothes, videogames and appliances, the less capable they become of experiencing intrinsic value from other actions.

This, in turn, leads to slow-growing yet severe bouts of depression and anxiety as joy and happiness become directly correlated in the mind with the consumption of products.

There’s a lot more that Johann Hari speaks about in his book, so we’d highly recommend you give it a read and have a look yourself if you’re curious about the topic.

We’d personally love to cover more of this, but this is only a blog and not a novel and we need to sign off at some point or we’ll be here all day.

If you haven’t already listened to the podcast than give it a shot and hear for yourself the lads stories of their own experiences and how they overcame their own difficulties with mental health.

Until then, see ya round!

Hey! You got through another episode of the Simple Minds Podcast! Good for you! If you find yourself getting inspired by the lads chats than do us a favour and leave a review for the show on Apple Podcasts! It helps massively and lets us reach out to more and more people!