Kaboom! How to 10x Your Life with Cambrian Explosions! 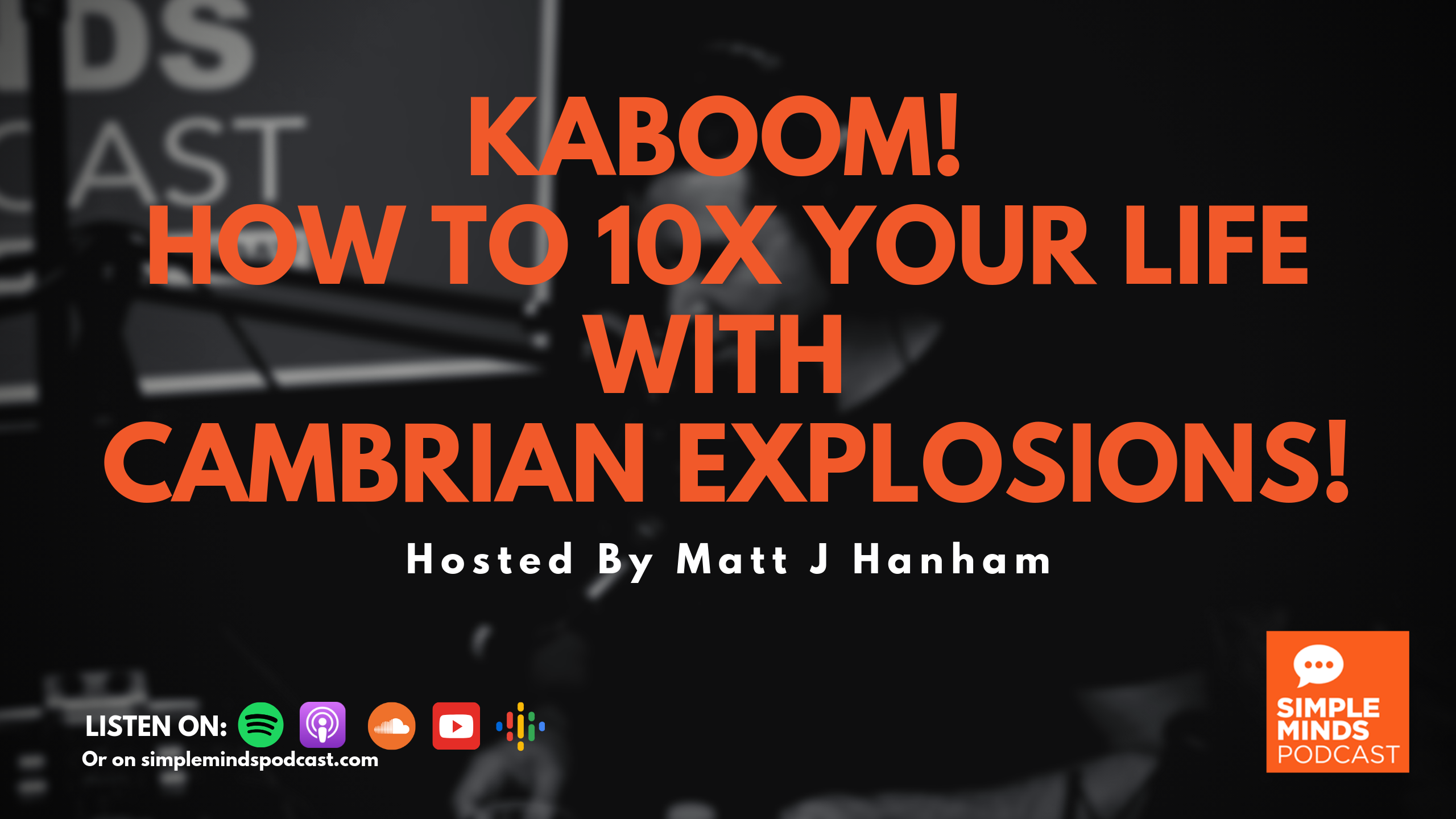 For another EXPLOSIVE episode of the Simple Minds Podcast!

Matt is running the demolition show this week as the lads discuss the importance of Cambrian Explosions and how they factor into the perception of our lives and careers.

Matt has brought with him the Western Australian made pinot noir - Madfish.

What Are Cambrian Explosions?

Looking at the original concept, the Cambrian Explosion is essentially defined as the period of time in the Earth's history where a relatively large number of multi-cell organisms evolved very rapidly into a huge variety of species.

This period is referred to as an explosion because the number of species rose almost exponentially during this brief period. Previous millennia had shown only a low level of growth and even time periods after never equaled this level of species generation on such a scale or speed.

Hilariously, it should be put into context that when speaking about a “brief” time in Earth's history, we’re actually referring to a span of time covering several million years! Although, when comparing that to the several billion years the Earth has been around, that’s quite a brief period of time indeed.

This idea of a sort of linear growth model being observed as a period of rapid growth bookended by plateaus of relative inactivity is called - Punctuated Equilibrium.

Punctuated Equilibrium argues that species in a system only undergo evolutionary change during brief periods of rapid change following a stage of stasis.

This rapid branching of new species from the primary genus is referred to as cladogenesis.

In business, we find this replicates itself, except each new species is usually recognized as being a business or aspect of a wider company. The cladogenesis part is usually reserved for when a business expands or when a person starts a new business entirely.

A frequent example of this concept in action is the case of Warren Buffet, who for large parts of his own life only progressed relatively slowly, with his growth financially being probably seen as entirely unremarkable, if not under-par for what his peers were achieving. This contrasted heavily with the brief periods in Buffets career where he was able to make massive gains on wise investments.

In fact, during these periods of stasis, where Buffet would seem to only ever be performing as well as the market average for his investments, Buffet spent much of this time reinventing his work philosophy and changing the full scope of his business practice to suit conditions for the future. Essentially, Buffet figured out early on that preparation was key in his bid to try and ride the wave of the next big Cambrian Explosion, as opposed to his peers who maintained a belief that their progress was entirely linear.

“Give me six hours to chop down a tree and I will spend the first four sharpening the axe.” - Abraham Lincoln

This is probably the first major lesson to learn when going through a “plateau” in a business or life perspective.

Cambrian Explosions help us understand that - the majority of success occurs when someone does the near exhaustive level of preparation we almost never see. In fact, most of the time, an “overnight success” is usually just us seeing the “Explosion” that came after years of hard work and dedication to an idea.

A key example of this is Gary Vaynerchuck (or #GaryVee as he is known to most). In the past two years, the brand of Gary Vee has skyrocketed to new heights, with Vaynerchuck now becoming arguably one of the most influential people in the world when speaking on the topic of entrepreneurship and creating a digital presence.

Now to most, Gary Vaynerchuck seems like an overnight success, and why wouldn’t that be the case? It feels like yesterday that the man just started popping up in everyone's Facebook and Twitter feeds. The reality though, is that Gary Vee had been working away constantly for over a decade building his skills, his brand, his reach, and his influence. He started posting content online to promote his family wine business as early as 2006 with Wine Library TV.

Until, one day, for what looked like no reason at all,  he became an “overnight success”.

Cut Your Own Bullshit

The ultimate takeaway from all of this though should be to cut your own bullshit and do the work.

Yup, that’s right. More often than not, the thing that’s holding back someone from a Cambrian Explosion is the desire and the actual decision to follow through on their plans. If you have an idea that you’ve been sitting on for the past 3 months, then it’s probably time to get started and actually do it.

Because, consistently, it’s that decision that will create growth, whether personally or professionally and that growth can always lead to an explosion of opportunity and increase awareness, which in turn brings on greater success down the line.

“Opportunities multiply as they are seized.”  - Sun Tzu

So what are you waiting for?

That’s it for this weeks blog! Be sure to follow the latest adventures of the lads on Facebook and Instagram. The Simple Minds Podcast can be listened to on pretty much all major listening platforms such as Apple Podcasts, Spotify,  Soundcloud and Overcast!