How To Ignore The Haters With Sain Dzemail 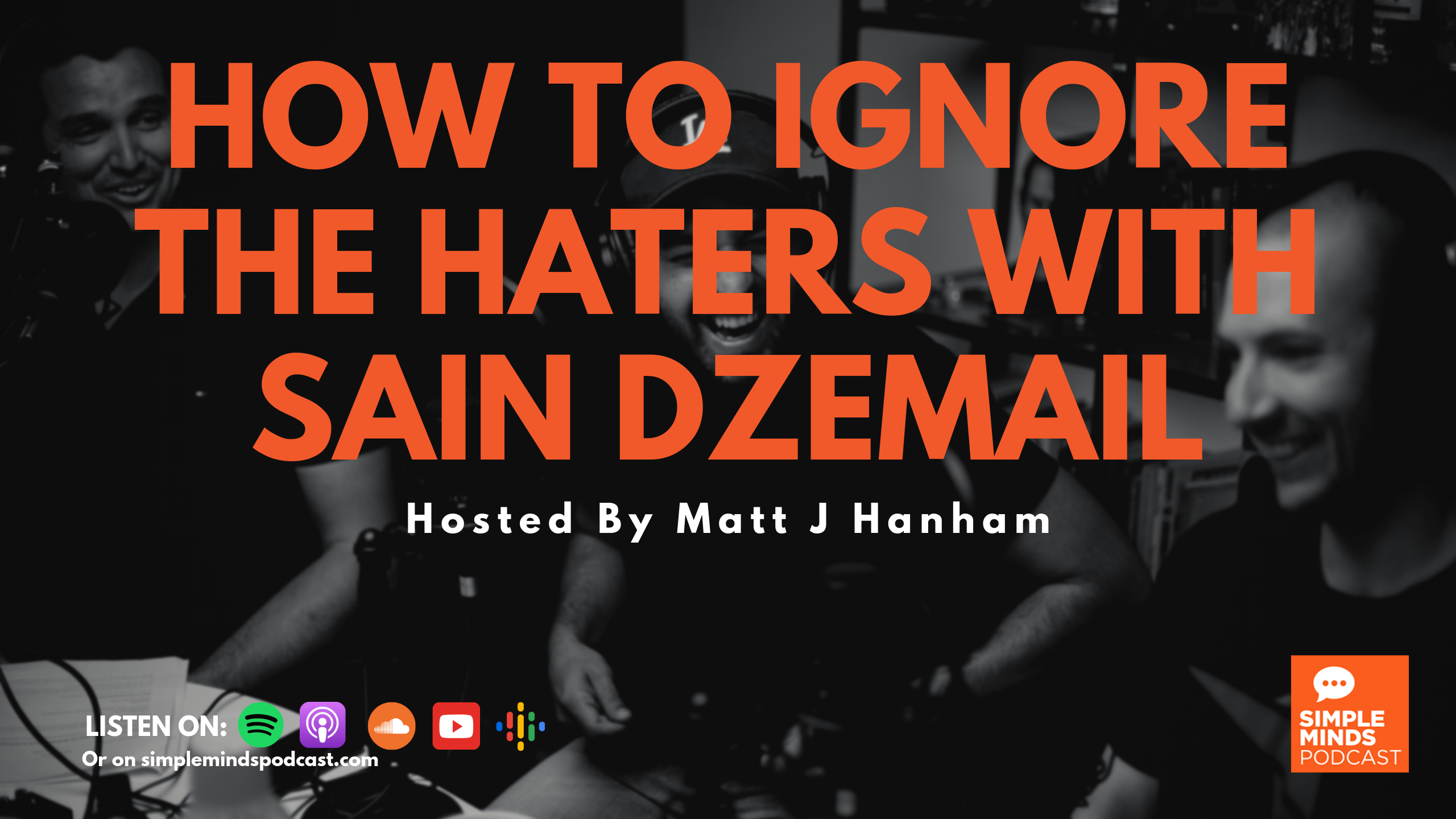 This week we’ve got something extra special for you guys! Matt’s managed to convince a friend of his to come on the show -- Sain Dzemail!

Sain is the founder of the Insain Youth Services where he mentors youths to help them build a greater vision for themselves as well as improve relationships with family and friends.

The lads have a lot to chat about so let’s get to it!

So, to make a long definition short, a hater is someone who makes out your accomplishments are lesser than what they. People who are “haters” are much committed to not likeing you, no matter what you do.

Sain is of the opinion that he doesn’t have any “haters” and that ultimately these people are pretty much either inconsequential or, more commonly, not what he would define as “haters”.

You look lost. Admittedly, so are we a little bit so let’s bring that back a bit.

What Sain is essentially saying when he says he doesn’t have any haters is that, ultimately, when someone is a hater, what they’re actually doing is thinking about you.

“I love that  when we get behind the darkness and the hate and all that bullshit and see what’s really going on.”- San

Now while that may seem obvious, the trick here is that to be a hater, you have to be thinking about the person frequently. For Sain, this is great! When someone thinks about him, even if only to think about how much they don’t like him, they’re still thinking about him and that free real estate in other people's minds is pretty valuable.

Think of it this way, when was the last time you spoke to someone who actually likes Kim Kardashian?

Yeah, not many to be honest.

Now think about how many websites, articles, Facebook posts, Tweets and everything in between is spent on seeing what Kim Kardashian is doing on a daily basis.

There are petabytes (that’s 1000 terabytes or 1 million gigabytes for those of you not up to date on tech) worth of information on Kim Kardashian that’s seen every day, with hundreds of millions of dollars spent as well.

All for someone who most people don’t even like that much.

So, in a way, having “haters” is a valuable tool because it means people are thinking about you more often than not, and that’s a damn powerful thing to have in others if we’re honest.

So Sain doesn’t think of these people as “haters” in the traditional sense, but as more people who will go out of their way to figuring out what he’s doing. Which only makes him a stronger person as time goes on.

The other side of the hater idea here is that we are not the people who we think we are.

“What the fuck are you on about now Blogger Boy?” - You, a Simpleton.

Essentially, the argument here is that there is a difference between what or who we are and how we are perceived by others.

When you see someone you know, there is a fundamental difference between how you see that person and how they see themselves. The argument goes further by stating that the person you see and interact with is so different from the person they view themselves as that they might as well be a different person entirely.

So again, Sain Dzemail doesn’t have any haters. Because when someone sees him and decides they don’t like him, they’re not seeing and interacting with Sain, but their subjective perception of Sain.

This means that, when someone spends all that time hating on Sain, all they’re really doing is spending time hating a version of Sain that only they can perceive. Which, when it’s put that way, makes hating on anyone seem like a fairly idiotic practice, to begin with!

Insain In The Membrane

Sain, understandably, is pretty passionate about it and as a result, works pretty hard at what he’s trying to do.

In addition to all of the other things your average youth service does, Insain works to develop youths based on their interests and modes of communication. Similarly, Sain always wants the young people he works with to develop an “open mindset”.

Similarly, Sain also utilizes what he refers to as a “Batman” technique of connecting with young people.

Now, we know what you’re thinking, does he take young people to Conrad house so he can teach them not to take drugs so they don’t turn into a supervillain he’d eventually have to do battle with?

Unfortunately, no. Though that would be totally awesome wouldn’t it?

What it actually means, is that Insain gets young people in touch with individuals that they hope to one become themselves. As it turns out, when a young person gets told to do something by someone they admire and one day hope to emulate, they’re much more likely to follow through on that instruction.

So just like Batman, it sounds pretty damn sneaky, but in a really cool way.

Well, that's it for this week in Simpleminds! We'll be back again next week, be sure to keep an eye for next weeks episode next Friday!

The Way of the Superior Man - David Deida