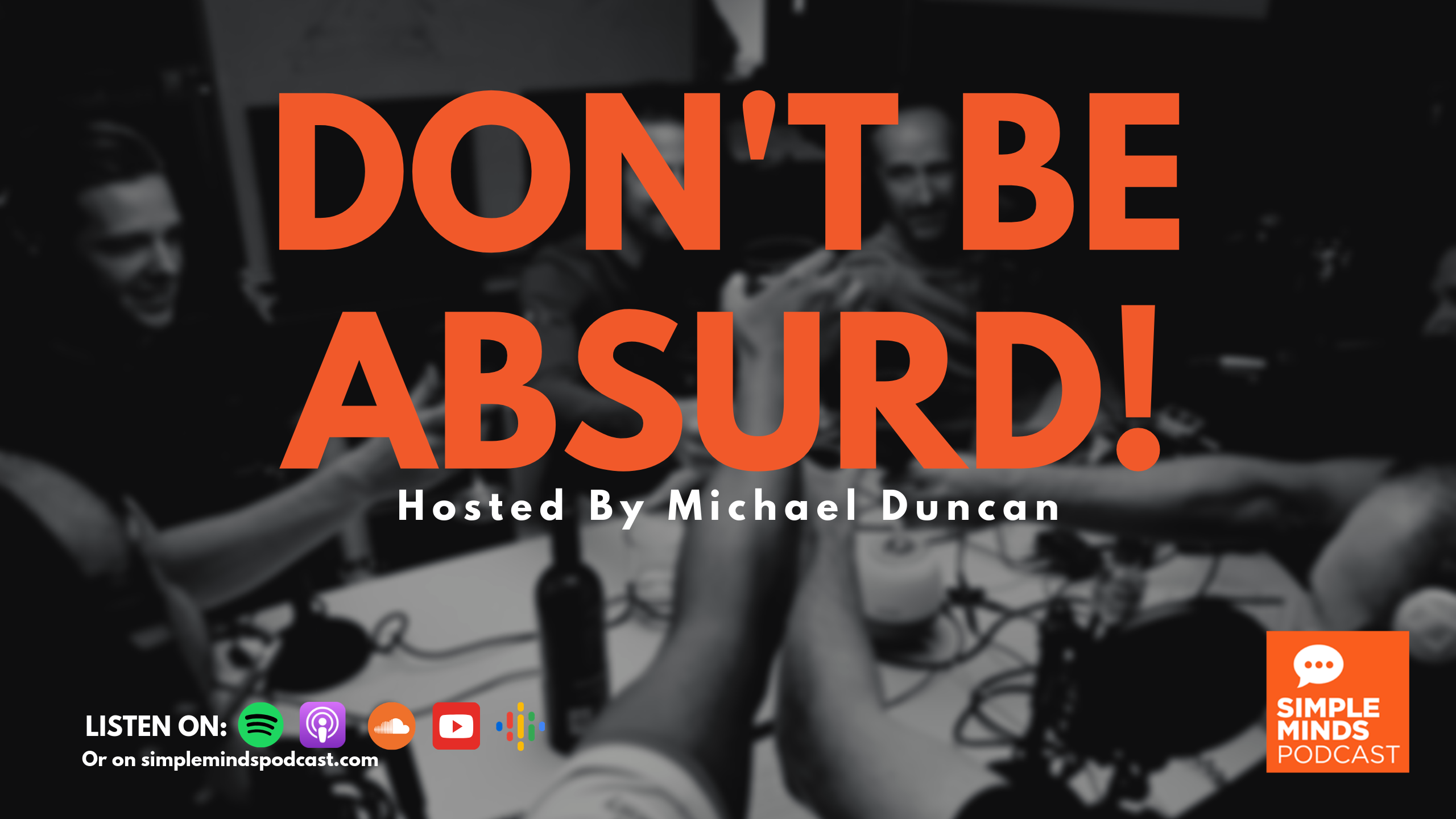 It’s another week gone by and, would you look at that, a cold, perspiring and frothy episode of Simple Minds Podcast is waiting for you to skull down!

“It would have fizzed properly but Travis already popped my cork.” - Michael Duncan

“Or popped your cherry.” - Conrad Francis

Man, we really are the right crowd to be speaking on these lofty topics.

So, what is the meaning of life?

Well, a fair number of people have tried to find out or, lacking any sufficient evidence, come up with their own. Since arguably the beginning of human life, pretty much everyone has thought, at least once:

It’s that desire for meaning that has arguably led the human race to its position as the dominant species of Earth (after, of course, the Honey Badger).

But what happens if we come to the conclusion that there isn’t any meaning to the universe?

“To the dumb question "Why me?" the cosmos barely bothers to return the reply: why not?” - Christopher Hitchens, Mortality

Well, it’s a fair thing to consider, which leads us straight to famed philosopher (though don’t tell him that) Albert Camus! 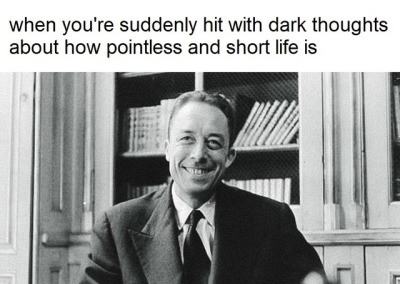 Camus, in addition to apparently being super fun at parties, is arguably the foremost philosopher on the subject of Absurdity and the exploration of the absurd as a mindset.

For Camus, trying to find meaning in our existence should be viewed as a fairly ridiculous idea and that we should be more concerned with attempting to reconcile with the idea that the universe doesn’t have any meaning instead.

For Camus, the only question any philosopher (though he famously rejected the term “philosopher” being applied to himself), should be asking themselves is whether to commit suicide or not. 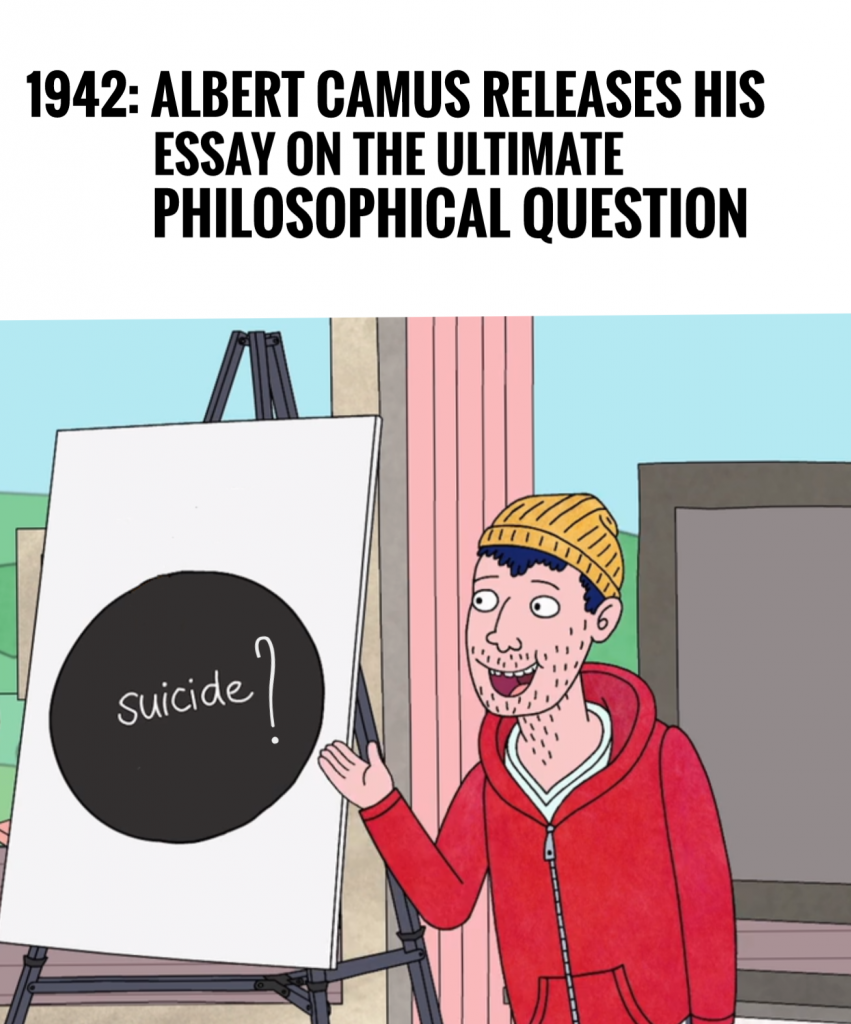 Since, as far as Camus was concerned, committing suicide was a rather unproductive stance to take, two alternative mindsets were encouraged instead. That being to either create a framework of belief that informs meaning (eg. religion) or simply accepting that life has no meaning and not allowing the revelation of such a piece of information to bother you.  (Camus famously told people to “go to the beach” each time they found themselves disturbed at the idea”)

For Camus, creating such a framework like religion as a tool to explain what he viewe as being “unexplainable” would require a leap in logic that Camus often described as being a form of “philisophical suicide”. As such, Camus never endorsed others to choose religion or spirituality as a way to acquire a sense of meaning.

Rather, as previously mentioned, Camus endorsed the third column of belief by encouraging others to acknowledge that there was, in fact, no meaning to the universe. Not that this means, of course, we couldn’t continue to strive to find some. It is called “absurdism” after all, so the idea that humans would continue to try and find meaning in a universe they believed was ultimately bereft of any would fit the model perfectly for a truly absurd existence.

A frequent example of the idea of absurdism, as described by Camus, is of course the story of King Sysiphus, who was doomed to push a large boulder up a hill for all eternity as punishment for angering the gods.

Sysiphus’s story symbolises, to many, the inherent folly of the human pursuit of meaning when treated with an infinitely huge and chaotic world that, for all intents and purposes, completely lacks any meaning itself.

Even more so, when Sisyphus does eventually manage to push his boulder up the hill, he was to watch, impotently, as the boulder then rolls down the hill again, even further symbolising the absurdity of his own existence in that moment.

"Thus I draw from the absurd three consequences, which are my revolt, my freedom, and my passion. By the mere activity of consciousness I transform into a rule of life what was an invitation to death, and I refuse suicide." - Albert Camus

Søren Kierkegaard in the House

So what with all of this talk of Albert Camus, surely there is someone else we can turn to when discussing the absurdity of existence?

Enter Søren Kierkegaard, a guy who was discussing absurdism a full century before Albert Camus. And boy does he come to some absurdly different conclusions (Pun intended).

Kierkegaard was instrumental primarily as being the only writer prepared to speak on the process of human thought if greeted by the notion that their own existence was meaningless. As these ideas were fairly unusual and probably quite contemptible during the era he lived, Kierkegaard often wrote under a variety of pseudonyms.

For Kierkegaard, the reaction of the mind to the notion of a meaningless existence would, or should, be very different, as he would have undoubtedly rejected the preference of Camus to accept meaninglessness, arguing rather that such an act of “rebellion” against the mind's desire to find meaning would be even more absurd than the creation of a spiritual framework.

As a result, no matter how irrational the thought would be, the logical leap of following a religious belief, while still acknowledging the fundamental meaningless of existence,  would be almost necessary as a form of self preservation from the negative effects of nihilism.

This is Your Brain on Absurdism

So, just what is the meaning of life? If we are encouraged to still search for meaning, despite acknowledging the meaningless chaos of the universe than exactly what conclusions are we actually capable of acquiring?

Well, as it turns out we have a few, so hold onto your butts Simpletons, because things are going to get even nuttier than usual:

God or a Higher Power: Well, first of all, let's get the big man out of the way. Assuming we acknowledge our own meaningless, than the belief in God incomprehensible from a human perspective as “faith” God or Gods vision (which would be equally incomprehensible) would be the peak of absurdity.

However, this is not to say that we must exclude God, in fact, believing in God, or a higher power in general, is perfectly acceptable as this wouldn’t change the idea that the universe is meaningless. Camus would argue, however, that such a beleif would be “philisophical suicide” as it would continue to deny the the contradictory relationship between humanity and the universe.

Freedom: A key argument in the acknowledgement of the absurd is the concept of personal freedom. Camus argues that freedom is only achievable as far as what the absurdity of existence permits, in other words; the more absurd and meaningless existence seems to be, the more personal freedom we have to act as a truly absurd universe would undoubtedly mean a universe bereft of rules and values beyond what we personally put onto ourselves. The caveat of course being the resignation that our existence is completely meaningless in the process.

Morality Does Not Equal Integrity: The obvious conclusion drawn by many when confronted with the absurd, is the idea that morality would, by extension, be rendered moot. While true, for the absurdist, morality should not be a guiding principle as such a concept of right and wrong would be justly viewed as being far to transient in nature to be fully relied on. Instead, when navigating life, the absurdist would instead rely on their own integrity, as this would be far more universally applicable as well as being less shifting in nature.

So, I think we’ve got the rough gist of what absurdism is. If none of this made sense to you than that’s cool, have a look at some of the links below to get some cool breakdowns of what Absurdism is and how to deal with the crushing reality that is the incomprehensible universe!

This is Blogger Boy signing off, be sure to listen to the latest episode if you haven’t let us know what you think through Facebook, Instagram or even Youtube! The Simple Minds podcast is also on Spotify, Stitcher, Apple Podcasts and even Overcast!

Why Life Is Meaningless According to Absurdists | BBC Ideas